3 Reasons Why Orlando is Better Off Without Amazon’s HQ2 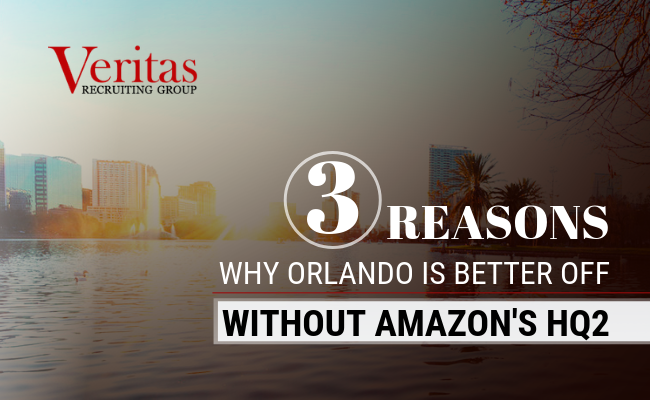 For the better part of the past year, dozens of cities across the country have anxiously waited for Amazon to announce the location of their second corporate headquarters. After considering a staggering 238 incentive-heavy proposals from cities throughout the country, Amazon surprised the nation and announced that two locations had been selected: one in Long Island City, another in Northern Virginia. Sorry City Beautiful, Orlando wasn’t chosen.

However, while the prospect of receiving 50,000 jobs paying an average of $100,000 sounded amazing for our city, losing out on the Amazon sweepstakes is not all bad.

Who Would Fill the Jobs?

The national unemployment rate has hit its lowest mark in over 40 years at 3.6%. Here in Orlando, it’s almost a full point lower at 2.7%. With the vast majority of the population gainfully employed, filling the current abundance of vacant jobs has proved challenging for companies across the region. Which begs the question, where would Orlando find tens of thousands of people to fill the jobs at Amazon?

A good chunk of people would surely relocate to Orlando for the opportunity to work for a large, and perpetually expanding, company like Amazon. But, to get started, Amazon would need to hire local talent quickly.

With so few people unemployed, hiring local talent would require most of the workforce joining Amazon to do so by leaving their current companies—creating job vacancies as they depart, hurting hundreds if not thousands of local companies.

On paper, having talent relocate to your city is a good thing. Relocating employees become tax-payers, creating a larger pool of resources for a city to utilize. However, cities need to have the infrastructure in place to absorb sudden growth. Here in Orlando, our population is already growing rapidly at a rate of 3.2%, a full percentage point above the national average. If you add a portion of the 50,000 jobs Amazon’s headquarters would have brought to the city, that rate would’ve become considerably larger.

Compounding the already fast-growing population here in Orlando would cause challenges for public transportation, traffic, schools, and housing inventory. Larger cities, such as the ones Amazon selected, are far more prepared to absorb an influx of relocating employees than Orlando.

Some of the incentives that cities included in their proposals included advantageous tax breaks, low-interest home loans for Amazon employees moving to the area, infrastructure and transportation improvements, and other financial exemptions. The winning bids by Long Island City and Northern Virginia included $1.5B and $573M in financial incentives respectively. When you factor in that the locations are splitting the new jobs at 25,000 apiece, there is valid doubt into whether the new jobs are worth the drain on public resources.

Companies regularly negotiate with local governments to get the most tax-friendly deal possible when developing new locations for their businesses. Sometimes the investment made by the local governments pays off, other times it can be quite damaging to local economies.

After it’s all said and done, Orlando will probably be singing the Garth Brooks song “Unanswered Prayers”.

In the end, Orlando did not receive much consideration from Amazon. But even if we had, the combination of filling that many jobs with low unemployment, our already quickly growing population, as well as the high cost to secure a winning big, Orlando is probably better off with Amazon opening headquarters elsewhere.