Keep the Streak Alive: Record Job Growth in the U.S. 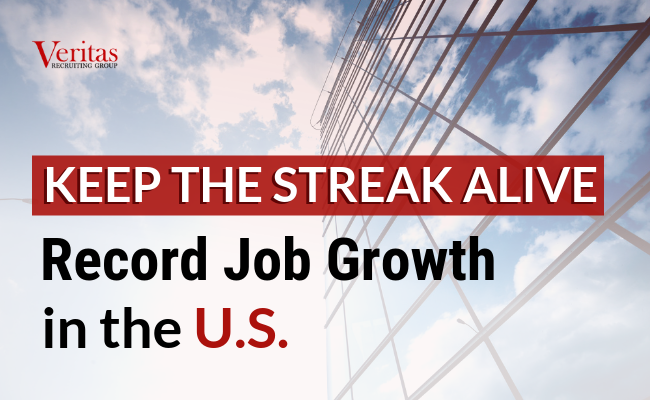 You may have heard about it on the news, but job growth is currently on a roll. The United States is riding the longest streak of consecutive jobs growth in its history. The unemployment rate sits at 3.3% in Florida and 4% nationally.

Because of the low unemployment, there are certain challenges facing candidates and employers. Here are a few of the effects of unprecedented jobs growth in the US.

The Effect On GDP

One of the major boons attributed to job creation and job growth is economic growth and strength. When employment is high, especially for skilled jobs, many economists believe that gives workers more buying power, fueling economic growth. While the real numbers sometimes show different results, it is still something many researchers point to when creating projections.

Although national projections see the GDP growth rate slowing over the coming months, many states are seeing the opposite. Florida is one of those states, boasting the 8th fastest job growth rate in the country. Due to the explosive growth, construction and real estate business is booming and the state GDP is expected to grow 3.8%.

One hundred months. That is the current jobs growth streak as of January 2019. The longest in history by double. Despite the government shutdown, over 300,000 jobs were added in the first month of the year. For candidates, that is great news, there is a strong demand for talent, so landing a job or leaving a current job can be more attractive.

For employers, it’s a little bit different. Not only does low unemployment mean a possible increase in turnover, but it’s also a very competitive market for available talent. Candidates are in the position of power and may pick and choose from many positions. It even means that, despite possible reputation damages, some candidates simply don’t show up for interviews.

Employers looking to fill positions quickly and efficiently are turning to recruiting and staffing firms to help find the right candidates.

Wage Stagnation and Other Ripples

Currently, available jobs are split between high-skill, high-wage jobs, and low-skill, low-wage jobs. There aren’t many jobs being added in the middle, allowing for movement between the two areas. As those wage numbers stagnate the economic buying power of the low-wage workers is limited, slowing overall economic growth.

It isn’t all negative though. Many employees are positive because they have been able to end long-term unemployment and re-enter the workforce. While they may not be directly into the mid-level jobs, they are happy to be back in the workforce.

If you’re interested in filling your corporate finance positions, or a finance professional looking to take advantage of the strong labor market, Veritas Recruiting Group can help. Contact us today to learn more about our search process.