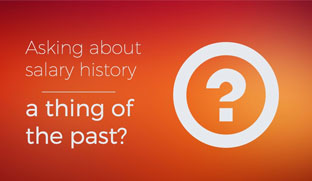 Some states and cities have banned employers from asking questions regarding salary history.  Below is a list of states and cities where these bans have or are being implemented (this information has been compiled by BusinessInsider.com):

Please note, that if you work or are applying for positions in states/cities that do not ban salary history questions, you most likely will be expected to provide that information.